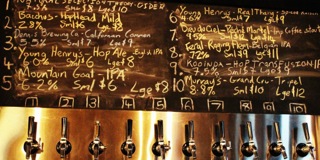 It’s only a few weeks until Summer and soaring Brisbane temperatures means sunshine and beer.  Not so much of the dark stuff, more of the pale and cleansing kind.

We’ve never been the types to sit in one venue all evening.  Why would you, when there’s so many different places, with different design to look at, different bar staff to chat with and different crowds to check out?

The solution … a craft beer tour.

Teneriffe is one of our favourite areas in Brisbane for a little beer wander.    Top of the list for craft beer variety is Tipplers Tap.   When you see the décor, you know Tipplers is all about the beer.  Although there are plenty of bottles in the fridge, we’ve never needed to go beyond the 12 taps as they change all the time.  And you can taste all the beers as well, so there’s zero chance of ordering a dud.  The only problem we have at Tipplers (aside from the 10pm closing time) is trying to achieve top score on the ACDC pinball machine.  How that Tom guy can score 119 million points when we can’t get past 20 million is a mystery to us.

Nearby neighbour Green Beacon Brewing Co was the first craft brewery in Teneriffe.  It’s a huge warehouse (well technically, brewhouse) so is a great venue for a group.  Green Beacon brew and pour a full range of their own beers, including pale and amber ales, and IPL, kolsch, IPA. Porter and a few seasonal or special releases.  We like getting a table in front of the big roller door when the sun is out.  Be warned that the stairs to the toilet can be (pick one) challenging/treacherous/amusing after a long afternoon. 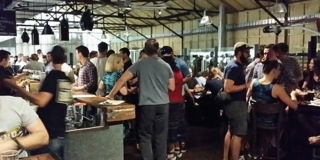 Newstead Brewing Co completes the trio of specialty beer houses in Teneriffe.   With twelve taps  pouring eight of their own beers and four other local brews, there’s something for all.  It’s also the best bet for a meal  with steak, burgers, pizza and chicken parmas to accompany your booze. (Mind you, Tipplers does great cheap snacks and there’s a plethora of food places across the road at the Gasworks Plaza).  Newstead Brewing Co is our choice of the three for later evening atmosphere.