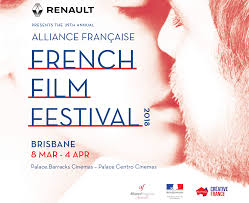 In honour of the recent 90th Academy Awards, we’d like to talk everything film, cinema and art!

Brisbane has a pretty exciting range of cinematic experiences on offer – from affordable flicks to luxury nights out! (Keep reading for more info)

Maurice Chevalier was the first French actor to be nominated for an Oscar in 1929. Since then, French cinema has won hundreds of Oscars over the years.

Brisbane is currently celebrating all of the above, with the annual French Film Festival!

Let’s discuss the last two facts first. French film has long since established itself as a cultural institution, a law unto itself. It’s often raw, sensual, and determined to tell stories that get right to the heart of human emotion and experience (pun intended – high five!).

The French Film Festival is back in Brisbane for its second year. There is something to watch every night, held at two central venues: Palace Centro and Palace Barracks. The festival showcases the very best of recent French Film, including Ismael’s Ghost starring French darling/Oscar winner Marion Cotillard. Tickets are available here, with options for bulk tickets for the true enthusiast.

It’s not surprising that a festival like this has flourished in Brisbane. We have a long history of cinema in our city. Fifty years ago there were 15-20 cinemas in the city alone, and a picture house in almost every suburb (swoon). Weekend cinema trips were a habitual family tradition.

Unfortunately, the 1930s Depression saw much of these theatres closed and abandoned. But we have worked hard to hang onto what we have. One of the best-kept historical theatres is the Plaza Theatre in Paddington. It now houses an antique centre, but the stage and front can still be seen. Mr Maggs, organiser of the Cinema and Theatre Historical Society of Australia (CATHS), said in an interview with 612 ABC Brisbane:

“The theatre…was one of five atmospheric [theatres] built in the country,” he said. “It would give you the illusion that you were sitting outside in the open-air with stars and clouds on the ceiling.”

One of the oldest working cinemas you can find in Brisbane is the Balmoral Cinema. An open air theatre first operated on the site, until the then-named Avro theatre opened in 1926. This theatre is now Cinema One in the complex that pays homage to several time-periods. The low-ceilings held up by black and gold columns, and the psychedelic 70s carpet will ensure you feel like you’ve stepped back in time. And the best part? It’s affordable at $8.50 per film for an adult.

The last cinema we’d like to draw your attention to is The Elizabeth Picture House. It’s situated in one of the first buildings to be erected in the CBD (1879 to be exact). The Sourris brothers (from the Five Star Cinemas family dynasty), have restored the beautiful Tara House, formerly the Irish Club, into an eclectic theatre that mixes the old with the new. There are five screens in the complex – three of which are donned The Royal Rooms. They include luxurious reclining seats and a food and drink service. And you can have all that for the same price as a standard cinema ticket – double win!

Forget the fact – go and see a film!

Find out more about Brisbane’s art scene with Walk Brisbane’s Art + Design Tours.  These tours, which are held three times a week explore the burgeoning, and often little known, art scene of Brisbane.  If all types of art, particularly street art takes your fancy check out our blog about  the 2018 Brisbane Street Art Festival.